Directed by Michael Gordon, Pillow Talk (1959) tells the story of Jan Morrow (Doris Day), a successful and self-sufficent interior decorator who, much to her annoyance, shares a party line on her home phone with a philandering Broadway composer named Brad Allen (Rock Hudson). Even though they have never actually met face to face, they soon develop a feud over the use of the party line: Brad is constantly using the phone to chat with one woman after the other, while Jan needs to use it for business. One of Jan's clients is millionaire Jonathan Forbes (Tony Randall), who repeatedly throws himself at her to no avail. Unknown to Jan, Jonathan is actually Brad's old college buddy and current Broadway benefactor.

One evening in a nightclub, Brad finally sees Jan and learns who she is. Attracted to her, he fakes a Southern accent and invents a new persona: Rex Stetson, wealthy Texas rancher. He suceeds in wooing Jan and the pair begin seeing each other regularly. When Jonathan finds out about Brad's masquerade, he forces his friend to leave New York and go to his cabin in Connecticut to write new songs. Brad invites Jan to join him and, once there, she finally discovers the truth. Back in New York, Jonathan is pleased to learn that Brad has fallen in love at last, while conversely Jan will have nothing to do with the playboy. Brad asks the help of Jan's drunken housekeeper, Alma (Thelma Ritter), who suggests he hire Jan to decorate his apartment so that they will be forced to collaborate. Still angry, Jan decorates Brad's apartment in the most hideous manner, which makes him furious. He storms into Jan's apartment and carries her through the street back to his place, where he explains all the changes he has made to end the bachelor lifestyle because he thought they were getting married. At that moment, her face lights up and they lovingly embrace.

Jan Morrow: I have no bedroom problems. There's nothing in my bedroom that bothers me.
Brad Allen: Oh-h-h-h. That's too bad.

In the late 1950s, the film industry decided that it was essential for Doris Day to change her screen image if she was to survive as a top star. By 1959, she had not only dropped from the top box-office personalities, but her last five films had not been as profitable as previous ones. She had been the girl-next-door for too many years and now, at 35, she needed to catch up with the moviegoing public, who had grown more sophisticated with the passing of decades. When producer Ross Hunter sent Day a script for a new project called Pillow Talk, she was instantly attracted to its humor and cleverness. The story had been devised by Russell Rouse and Clarence Greene, who sold it to RKO in 1942. When it was not produced, the writers repurchased it in 1945, two years before selling it as play. They bought it back again in 1951, finally selling it in 1958 to Arwin Productions, the company owned by Day's then-husband, Martin Melcher. Being genuinely unaware of her potential as a sex symbol, Day had difficulty visualizing herself as a chic interior decorator. Fortunately, Hunter's argument that she had «one of the wildest asses in Hollywood» convinced Day that she was not just an old-fashioned girl and she gladly took the job.

Hunter wanted only one actor to serve as Day's leading man in Pillow Talk, Rock Hudson. Hunter had already produced six of Hudson's pictures, including the hugely successful Magnificent Obsession (1954) and All That Heavens Allows (1955), and the two had become close friends. When Hudson read the screenplay for Pillow Talk, he was impressed by its witty dialogue, but apprehensive about it being a comedy. Apart from a brief appearance as himself in an episode of I Love Lucy (1951-1957), he had no previous experience with comedic acting. He was unsure of whether he could succeed at it, but a meeting in Hunter's office with Day and director Michael Gordon (in his first film assignment since being blacklisted in 1951) persuaded him to move forward with the project. In the meantime, Maurice Richlin and Stanley Shapiro were brought in to work on the script, while Tony Randall and Academy Award nominee Thelma Ritter were added to the cast.


Pillow Talk was filmed between early February and mid-April 1959. According to Hudson, the final scene — in which Brad storms into Jan's apartment, pulls her out of bed and when carries her through the streets of Manhattan, back to his re-decorated apartment — was actually the first one that they shot. Due to back problems, Hudson carried Day on a shelf with her sheets and blankets over her to get through the many takes. According to Hudson, «I could have managed if only one take had been involved, but we went on endlessly, primarily because there was a bit actor who played a cop on the street, and as we passed him Doris' line was 'Officer, arrest this man,' and the cop was supposed to say to me, 'How you doing, Brad?' but that stupid actor kept calling me Rock. So back to our marks we went for another take and another and another. I'll bet we did that scene twenty times. That's why the shelf for Doris to sit on.» In addition, Hudson related that when he pulled Day out of bed, he forgot to let go of her ankles, «with the result that my leading lady crashed to the floor.»

Although Hudson had been a Doris Day fan since serving as an aircraft mechanic with the U.S. Navy during World War II, the two had never met before they started filming Pillow Talk. He was nervous to be working with Day, whom he considered one Hollywood's most accomplished commediennes, but she quickly put him at easy. «You don't have to worry about it,» she told him. «The script is funny. When you have funny lines, you're funny.» Hudson and Day soon realized that there was great chemistry between them and that they could make each other laugh off camera. «Doris and I became terrific friends,» Hudson later said. «She's a dynamo — a strong lady. And boy, what a comedienne she is! The trouble we had was trying not to laugh. Doris and I couldn't look at each other. You know, that sweet agony of laughing when you're not supposed to? That's what we had.» For her part, Day said, «Every day on the set was a picnic — sometimes too much of a picnic, in that we took turns at breaking each other up.» According to Hudson, «they had to add a week on to the shooting schedule because we could not stop laughing.»


Pillow Talk premiered simultaneously at the Palace and Murray Hill Theatres in New York on October 7, 1959. Critical reviews were generally positive. Bosley Crowther of The New York Times called it «one of the most lively and up-to-date comedy-romances of the year,» while Variety described it as «a sleekly sophisticated production.» The film was also sucessful at the box-office, grossing $18,750,000 domestically. At the 32nd Academy Awards, Pillow Talk won the Oscar for Best Original Script and was additionally nominated for Best Actress (Doris Day), Best Supporting Actress (Thelma Ritter), Best Art Direction (Color) and Best Original Score. Day lost to Simone Signoret for Room at the Top (1959).
The popularity of Pillow Talk not only revived Day's career, but also Rock's, which had hit a slump in the previous couple of years with a series of commercial failures, including A Farewell to Arms (1957) and Twilight for the Gods (1958). Day and Hudson reunited for two more film, Lover Come Back (1961) and Send Me No Flowers (1964), and became lifelong friends as a result of their screen collaborations. Although Send Me No Flowers was the last of Day and Hudson's joint silver screen appearances, they got the chance to work together in two other occasions after that. The first happened in 1971, when Hudson was one of Day's guests in her television musical special The Doris Mary Anne Kappelhoff. The second came in 1985, when she asked him to be the first guest in her cable television series Doris Day's Best Friends (1985-1986). At this point in his his life, Hudson was dying from what was then a mysterious new virus called AIDS, but he was determined to do the show anyway. When Day saw him arrive on the set looking extremely thin and frail, she was devastated to see that her dear friend was now just a mere shadow of his former strong and handsome self. Even in pain, Hudson managed to tape the show and the result proved that their chemistry was still as strong as it had ever been. Sadly, Hudson died less than three months after the episode aired, but the duo still got the chance to share the (small) screen one last time and reminisce about the good old days.

This is my contribution to The Doris Day Blogathon hosted by Love Letters to Old Hollywood. To see all entries, click HERE. 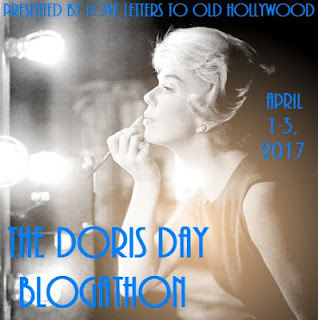