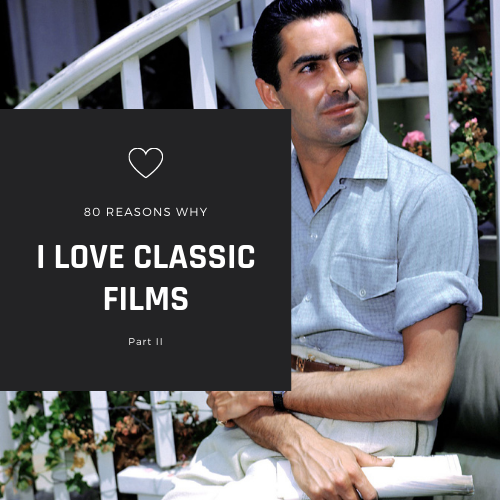 I started this blog six years ago as a way to share my passion for classic films and Old Hollywood. I used to watch dozens of classic films every month, and every time I discovered a new star I liked I would go and watch their entire filmography. But somewhere along the way, that passion dimmed down. For instance, I watched 73 classic films in 2016, and only 10 in 2020.
The other day, I found this film with Douglas Fairbanks Jr. that I had never heard of — the film is Mimi (1935), by the way — and for some reason it made me really excited about Old Hollywood again. It made me really miss the magic of that era and all the wonderful actors and actresses. And it also made me think of all the reasons why I fell in love with classic films in the first place. I came with 80 reasons, which I thought would be fun to share with you. Most of them are just random little scenes or quirky little quotes, but put them together and they spell Old Hollywood to me. Yesterday I posted part one; here is part two the 80 reasons why I love classic films.

24. Tyrone Power fiddling with his handkerchief in The Mark of Zorro (1940). All hail Tyrone Power, the undisputed king of flamboyance.

25. James Stewart's drunk conversation with Cary Grant in The Philadelphia Story (1940). A masterclass in acting, that's what this scene is.

26. James Stewart pulling up his trousers to reveal his skinny legs in The Shop Around the Corner (1940). This man was the definition of dork.

27. Vivien Leigh and Robert Taylor's scene in the rain in Waterloo Bridge (1940). This is positive, you see? This is final, you see? They are going to get married! You see?

29. Barbara Stanwyck fiddling with Henry Fonda's hair in The Lady Eve (1941). Hank is so smitten he can barely string two sentences together.

30. Humphrey Bogart saying «Here's looking at you, kid.» in Casablanca (1942). Hands down, my favourite movie quote of all time.

31. Robert Taylor eating a banana in Her Cardboard Lover (1942). Why this scene fascinates me so much, I honestly couldn't tell you.

32. Ronald Reagan asking where's the rest of him in Kings Row (1942). If you're skeptical about Ronald Reagan being a good actor, watch this film.

33. Bette David and Paul Henreid's cigarette ritual in Now, Voyager (1942). Why ask for the moon when we have the stars?

34. Katharine Hepburn «making» Spencer Tracy breakfast in Woman of the Year (1942). Were those pancakes or melting rubber?

38. Lauren Bacall «teaching» Humphrey Bogart how to whistle in To Have and Have Not (1944). These two should have written a book on how to flirt.

39. Joseph Cotten declaring his love for Ginger Rogers just before she goes back to prison in I'll Be Seeing You (1944). The romantic in me can't deal.

40. Frank Sinatra dancing in Anchors Aweigh (1945). And the Oscar for the most awkward dancer in the entire galaxy goes to...