This week on «Film Friday,» I bring you a film that had its unofficial premiere exactly 74 years and 2 days ago. This also happens to be one of the greatest comedies of all time.


Directed by Howard Hawks, Ball of Fire (1941) tells the story of Bertram Potts (Gary Cooper), a young linguistics professor who is overseeing the writing of an encyclopedia of all human knowledge, which he and his seven older colleagues have been working on for years. Realizing that his section on modern American slang is outdated and requires further research, Bertram invites several people from different backgrounds to take part in a slang seminar, including a sexy nightclub performer named «Sugarpuss» O'Shea (Barbara Stanwyck). Unbeknownst to Bertram, Sugarpuss is on the run from the police, who wanted to question her about her her gangster boyfriend, Joe Lilac (Dana Andrews).

Looking for a place to hide, Sugarpuss takes refuge in the house where the professors live and work, despite Bertram's objections. The older men soon become enamored of her blatant femininity, though their prim housekeeper, Miss Bragg (Kathleen Howard), is not so fond of her and demands that she leave. When Bertram, whom she now calls «Pottsie,» asks her to go, admitting that she has distracted him from his work, Sugarpuss declares that she is «just plain wacky» for him and proceeds to demonstrate to him the meaning of the phrase «yum yum» (kiss). Bertram is so taken with Sugarpuss's kisses that he decides to propose to her the following morning and even offers her an engagement ring, but before she can respond, she is taken away by Joe's henchmen, led by Duke Pastrami (Dan Duryea). Joe also has plans to marry Sugarpuss, but only because as his wife she cannot testify against him on court. Through a series of chaotic situations, the professors eventually manage to outwit Joe and his gang and rescue Sugarpuss, who believes that she is not good enough for Bertram. His forceful application of «yum yum,» however, effectively convinces her otherwise. 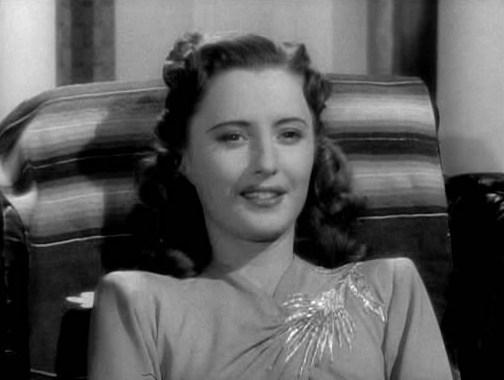 In the early 1940s, independent producer Samuel Goldwyn was beginning to get somewhat embarrassed by that fact that although he had Gary Cooper under personal contract, the actor's most successful films had all been made on loan-out to other studios. The arrangement had been highly profitable to Goldwyn, but he was still determined to find exciting material for Cooper that would keep him on his home lot. To that end, he approached Paramount Pictures about borrowing their top writing duo, Billy Wilder and Charles Brackett, who had recently won an Academy Award nomination for Ninotchka (1939). While Paramount had a strict policy against loaning out their screenwriters, they were eager to borrow Cooper for their screen adaptation of Ernest Hemingway's For Whom the Bell Tolls. In exchange for Cooper's future services, Goldwyn was able to get the writers that he wanted.

After rejecting the projects Goldwyn had in development for Cooper, Wilder proposed a rewrite of an unused fourteen-page scenario he had composed in Berlin eight years earlier titled «From A to Z,» the tale of a shy professor who recruits a brassy showgirl to teach him slang expressions. On his arrival in the United States, Wilder had Americanized the story with the help of Thomas Monroe, a junior writer at Paramount. Goldwyn liked the idea of Gary Cooper as a «shy, romantic lead» and immediately offered Wilder $7,500 for his story, promising an additional $2,500 if the picture was made. Wilder agreed, but not before obtaining permission to be on the set to observe every shot of the film. To research slang for their script, for which Goldwyn paid $80,000, Wilder and Brackett visited the drugstore across the street from the Hollywood High School, a pool room, a burlesque house and the Hollywood Park racetrack.

With no director under contract he felt right for the property, Goldwyn accepted Cooper's suggestion that he hire Howard Hawks, who was currently directing him in Sergeant York (1941). However, Goldwyn was uneasy about working with Hawks. Even though they had previously collaborated on Barbary Coast (1935) and Come and Get It (1936), Goldwyn thought Hawks had «no character»; he drank heavily, bet on horses and was always involved in real estate schemes. However, with his reputation as the «master of rapid-fire romantic comedies,» Goldwyn agreed that Hawks was the only logical choice to direct the newly titled Ball of Fire.

Goldwyn's first choice for the female lead in Ball of Fire was Ginger Rogers, but after winning an Oscar for her performance in Kitty Foyle (1940) she thought the role was «too frivolous» now that she had established herself as a serious actress. The script was then sent to Jean Arthur and Carole Lombard, but Columbia would not agree to loan Arthur out and Lombard was simply «not interested in the character or the plot.» Had Lombard accepted the part, it is very likely that she would have attended the film's opening in New York on January 16, 1942, instead of taking off on the bond-selling tour which ended in disaster when her plane crashed, killing everyone on board.

After Goldwyn tested starlets Virginia Gilmore, Betty Field and Lucille Ball, Cooper finally suggested Barbara Stanwyck, with whom he had just worked in Frank Capra's Meet John Doe (1941). Goldwyn had fond memories of working with Stanwyck on the critically acclaimed drama Stella Dallas (1937), which had earned the actress her first Academy Award nomination. As soon as Cooper mentioned Stanwyck, he and Hawks realized she was the perfect choice for the role of Sugarpuss O'Shea.

Hawks specifically requested newcomer Dana Andrews for the «tough-guy role» of Joe Lilac. Initially, Goldwyn was opposed to Andrews playing the part of a hoodlum, protesting to the director, «He's a nice boy, but he can't play gangsters.» Hawks, however, ignored Goldwyn's advice and cast Andrews anyway. The 32-year-old actor reportedly modeled his character on the notorious New York mobster Bugsy Siegel, whom he had met once at The Formosa, a restaurant conveniently located across the street from the Goldwyn Studios. In a life-imitates-art reversal, Siegel's girlfriend, Virginia «Sugar» Hill, appears in the film as a showgirl.

Ball of Fire began production on August 6, 1941 and was allowed a 48-day shooting schedule. Wilder was present on the set «as a fly on the wall,» closely observing Hawks's work in preparation for his own future career as a director. Like many filmmakers at the time, Hawks avoided a display of fancy visual style for its own sake, ranking the content, the acting and the writing higher in importance than the camerawork. Because of his «austere» approach to moviemaking, Hawks did not care for Gregg Toland's deep-focus cinematography, which he though would only «intrude» in a picture like Ball of Fire. However, Hawks was impressed with Toland's solution to one photographic dilemma. When Cooper enters a darkened bedroom and admits he loves Stanwyck, Hawks wanted just her eyes to show up in the scene. Toland told the director that the only way to accomplish that effect would be by having Stanwyck perform the sequence in blackface. She was utterly surprised at the suggestion, but was too professional to refuse to do it.

Leonid Kinskey, who appeared in the film as Professor Quintana, found Stanwyck «professional but cold,» saying that she never became a part of the collegial camaraderie that developed among the men in the cast. Nevertheless, her professionalism was appreciated by Hawks, as he enjoyed working with her enormously and always ranked her among the best actresses he ever directed. The feeling was not entirely reciprocated, however. Stanwyck once said that while she thought Hawks did a competent job, she felt the picture lacked «a certain spark of inspiration» and secretly regretted that Wilder had not directed it instead.

Wrapping one day ahead of schedule, Ball of Fire was booked for a week's engagement in Los Angeles beginning December 2, 1941 so that it could qualify for the Academy Awards. After its official premiere at the Radio City Music Hall in New York on January 16, 1942, Ball of Fire was a huge success, lifting the spirits of a nation going to war. Although most critics complained that the film's «single-note plot» dragged out for too long (111 minutes), they were generally charmed by its romantic comedy. Bosley Crowther of The New York Times, for instance, wrote that Goldwyn «has produced a picture which deliberately kicks the language around in a manner so colorful and lively that you can almost sense his tongue stuck in his cheek [...].»

Critics of the time (and Hawks as well) seemed to agree that Ball of Fire was an updated version of the classic story Snow White and the Seven Dwarfs. One reviewer even described the elderly professors as playing close parallels to the well-varied dwarfs, Cooper as a very shy Prince Charming, Stanwyck as a decidedly worldly-wise Snow White, and Andrews as a male counterpart to the Wicked Witch. To help audience members connect the seven elderly professors with the seven dwarfs from the fairytale, Goldwyn had his publicity department pose a portrait of the seven actors seated in front of a poster for Walt Disney's Snow White and the Seven Dwarfs (1937), with each in the same position as the dwarf he represented: S. Z. Sakall as Dopey, Leonid Kinskey as Sneezy, Richard Haydn as Bashful, Henry Travers as Sleepy, Aubrey Mather as Happy, Tully Marshall as Grumpy and Oskar Homolka as Doc.


With the success of Ball of Fire, Wilder telephoned Goldwyn requesting the $2,500 bonus he had been promised if the film was ever made. The money-conscious Goldwyn conveniently had no recollection of this «gentleman's agreement,» which so infuriated Wilder that he slammed down the receiver after telling the mogul that he wanted nothing more to do with him. Ten minutes later, Goldwyn called back: «Look, Billy, I don't want people going around Hollywood saying I'm not honest. Come on over, right now... and pick up the $1,500.» Although Wilder and Golwyn became friendlier over the years, they never worked together again and Wilder never saw those last thousand dollars.

Keen to capitalize on good material, Goldwyn remade Ball of Fire seven years later as a vehicle for Danny Kaye and Virginia Mayo, under the title A Song is Born (1948). Despite the creative disagreements they had had in the past, Goldwyn brought Hawks back to direct. He accepted the job purely because of the $250,000 paycheck and always said that he hated the picture. The production was problematic from the start. Kaye was temporarily separated from his wife, lyricist Sylvia Fine, and seeing a psychiatrist twice a day, which left him, according to Hawks, «as funny as a crutch.» In addition, Mayo disliked working with Hawks and was hampered by the fact that Goldwyn forced her to watch the original repeatedly and play her role exactly as Stanwyck had. Perhaps not surprisingly, A Song is Born was a failure and earned Goldwyn the some of the worst critical reviews of his career.