Classic Movie Fact of the Week #5: Alfred Hitchcock and the FBI 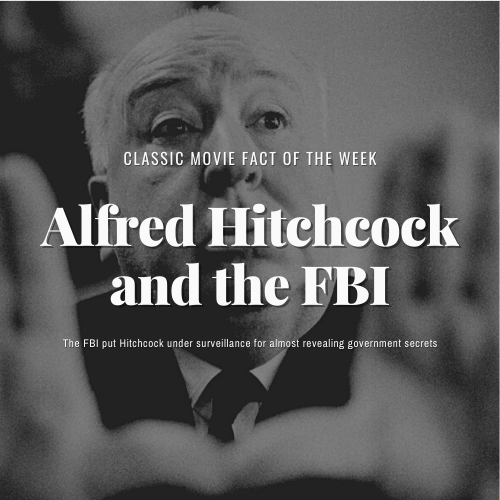 Did you know that...
Alfred Hitchcock came under the surveillance of the Federal Bureau of Investigation (FBI) for his use of uranium as a plot element in Notorious (1946)?
Notorious tells the story of Alicia Huberman (Ingrid Bergman), the alcoholic daughter of a Nazi, who is recruited by government secret agent T. R. Devlin (Cary Grant) to romance and spy on her father's friend, Alexander Sebastian (Claude Rains), in Rio de Janeiro. Although Alicia and Devlin are in love, he asks her to marry Sebastian out of duty to her country. After their wedding, Alicia explores Sebastian's mansion and finds the wine cellar locked. During a party, Alicia secretly gets the key to the cellar and gives it to Devlin. They discover uranium dust hidden inside a bottle, but now Sebastian has learned that Alicia is a spy and starts poisoning her slowly.
While developing the script of Notorious with Ben Hecht, Hitchcock was looking for a suitable MacGuffin (plot device) and decided to have Nazi spies smuggle uranium ore to make an atomic bomb. According to Hitchcock himself, he had this idea in 1944, a year before the world became aware of the existence of such weapon. He explained that a writer friend of his had told him about a secret project in New Mexico (the Manhattan Project led by J. Robert Oppenheimer), claiming that he also knew of German undercover experiences being done in Norway. At the same time, Hecht read an article about uranium, which he believed was related to the work being done in New Mexico and Norway, rumored to be the development of a nuclear weapon.
In mid-1945, Hitchcock and Hecht went to see experimental physicist and Nobel Prize laureate Dr. Robert Millikan at the California Institute of Technology to run their uranium theory by him. He warned them they could get arrested if they discussed the atom bomb too much, adding that hydrogen was the element they were hoping to harness, not uranium. Satisfied that they were not revealing government secrets, Hitchcock and Hecht kept their original idea. However, the director later claimed that he was kept under surveillance by the FBI for several months as a result of his idea and the meeting with Millikan. In any event, the dropping of the atomic bomb on Hiroshima on August 6, 1945 and the subsequent release of the details of the Manhattan Project removed any doubts about the use of uranium.