Classic Movie Fact of the Week #6: The Mafia and «The Godfather» 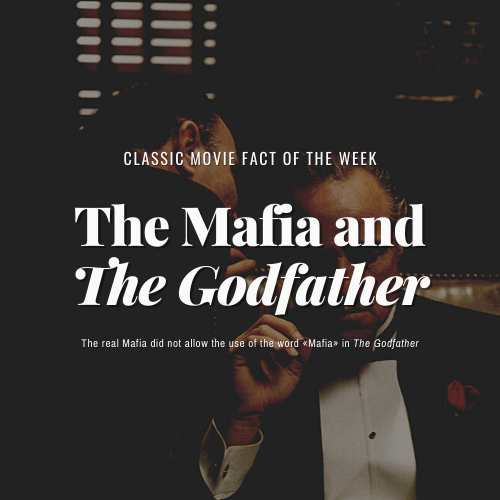 Did you know that...
In Francis Ford Coppola's acclaimed Best Picture winner The Godfather (1972), the word «Mafia» is never heard on screen because the real Mafia did not allow its use.

Due to its subject matter, The Godfather originally faced great opposition from Italian-Americans to filming on location in New York. In addition, the Italian-American Civil Rights League, which had recently been created by real-life mobster Joe Colombo, «cast a weary eye over the script» throughout production. The league, whose goal was to combat pejorative stereotypes about Italian-Americans, demanded that all mentions of «Mafia» and «Cosa Nostra» be removed from the dialogue. Colombo also requested that all the profits earned on the film's opening night be donated to the league's fund to build a new hospital. According to Coppola, Puzo's screenplay only contained two instances of the word «Mafia» being used and there was no reference whatsoever to «Cosa Nostra.» After those two expressions were deleted and replaced with other terms, the league gave its support of the film.
_______________________________________
SOURCES:
«25 Things You (Probably) Didn't Know About The Godfather»
«They're Having a Ball Making 'Godfather'» by Jerry Parker for The Toledo Blade (1971)