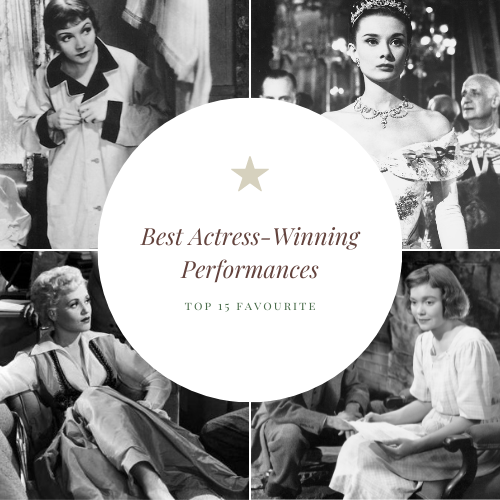 Throughout this month, I've decided to do a series of Oscar-related articles in anticipation to tonight's 89th Academy Awards ceremony, which I'm going to see live on television. Yesterday, I presented you my top 15 favourite Best Actor-winning performances, so today I thought I would do the same, but for Best Actress winners instead. As I've said before, please bear in mind that this is my own personal opinion, which of course is limited to the films I've seen so far.
15. Joan Crawford in Mildred Pierce (1945)
Mildred Pierce: I was always in the kitchen. I felt as though I'd been born in a kitchen and lived there all my life, except for the few hours it took to get married.

14. Joan Fontaine in Suspicion (1941)
Lina McLaidlaw Aysgarth: I must go now or I'll be late to luncheon. Anyway, if my father saw me come in both late and beautiful, he might have a stroke.

13. Elizabeth Taylor in Who's Afraid of Virginia Woolf? (1966)
Martha: I'm loud and I'm vulgar, and I wear the pants in the house because somebody's got to, but I am not a monster. I'm not!

12. Olivia de Havilland in To Each His Own (1946)
Jody Norris: When you've been wildly and deeply in love, Mac, you don't stop loving just because somebody dies. Certainly not if there's a child. It's the same love.

11. Sandra Bullock in The Blind Side (2009)
Beth: You're changing that boy's life.
Leigh Anne Tuohy: No, he's changing mine.

10. Vivien Leigh in Gone with the Wind (1939)
Scarlett O'Hara: As God as my witness, I shall never go hungry again.

9. Liza Minnelli in Cabaret (1972)
Sally Bowles: That's me, darling. Unusual places, unusual love affairs. I am a most strange and extraordinary person.

8. Claudette Colbert in It Happened One Night (1934)
Ellen «Ellie» Andrews: I proved once and for all that the limb is mightier than the thumb.

6. Brie Larson in Room (2015)
Joy Newsome: I'm sorry that I'm not nice anymore, but you know what? Maybe if your voice saying «be nice» hadn't been in my head, then maybe I wouldn't have helped the guy with the sick dog!

3. Audrey Hepburn in Roman Holiday (1953)
Princess Ann: I've never been alone with a man before, even with my dress on. With my dress off, it's MOST unusual.

1. Judy Holliday in Born Yesterday (1950)
Billie Dawn: [My father] always used to say, «Never do nothing you wouldn't want printed on the front page of The New York Times.»

And there you have it. These are, as of now, my top 15 favorite Best Actress-winning performances. Did I name some of your favorites? Were you surprised by my choices?