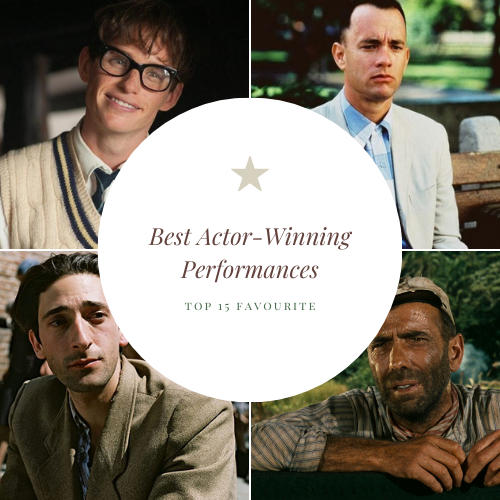 Throughout February, I have decided to do a series of Oscar-related articles in anticipation to tomorrow's 89th Academy Awards. Last week, I told you my top 10 favorite Best Picture winners from 1929 to 1969 and from 1970 to 2015, and today I am sharing with you my top 15 favorite Best Actor-winning performances. Again, please bear in mind that this is my own personal opinion, which of course is limited to the films I have seen so far.
15. Matthew McConaughey in Dallas Buyers Club (2013)
Ron Woodroof: Let me give y'all a little news flash. There ain't nothin' out there can kill fuckin' Ron Woodroof in 30 days.

14. Marlon Brando in On the Waterfront (1954)
Terry Malloy: You don't understand! I coulda had class. I coulda been a contender. I coulda been somebody, instead of a bum, which is what I am, let's face it.

12. Dustin Hoffman in Rain Man (1988)
Ray Babbitt: Of course you can't have pancakes without maple syrup.

11. Gregory Peck in To Kill a Mockingbird (1962)
Atticus Finch: You never really understand a person until you consider things from his point of view... Until you climb inside of his skin and walk around in it.

10. Maximilian Schell in Judgment at Nuremberg (1961)
Hans Rolfe: No, Your Honor. No! Germany alone is not guilty. The whole world is as responsible for Hitler's Germany.

7. Clark Gable in It Happened One Night (1934)
Peter Warne: Say, where'd you learn to dunk? In finishing school?

6. Adrien Brody in The Pianist (2002)
Władysław Szpilman: They all want to be better Nazis than Hitler.

5. James Stewart in The Philadelphia Story (1940)
Macaulay «Mike» Connor: Doggone it, C.K. Dexter Haven. Either I'm gonna sock you or you're gonna sock me.

4. Humphrey Bogart in The African Queen (1951)
Charlie Allnut: Nothin' a man can't do if he sets his mind to it. Never say die. That's my motto!

3. Eddie Redmayne in The Theory of Everything (2014)
Stephen Hawkins: There should be no boundaries to human endeavor. We are all different. However bad life may seem, there is always something you can do, and succeed at. While there's life, there is hope.

2. Roberto Benigni in Life is Beautiful (1997)
Guido Orefice: You are such a good boy. You sleep now. Dream sweet dreams. Maybe we are both dreaming. Maybe this is all a dream, and in the morning, Mommy will wake us up with milk and cookies. Then, after we eat, I will make love to her two or three times. If I can.

1. Tom Hanks in Forrest Gump (1994)
Forrest Gump: My momma always said, «Life is like a box of chocolates. You never know what you're gonna get.»

And there you have it. My top 15 favorite Best Actor-winning performances. Did I name some of your favorites? Were you surprised by my choices?