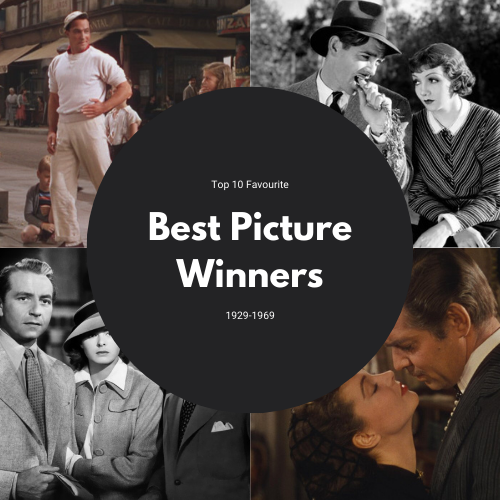 Throughout this month, I have decided to post a series of Oscar-related articles in anticipation to the 89th Academy Awards ceremony on February 26. To start things off, I thought I would share with you my top 10 favorite Best Picture winners from 1929 to 1969. Please bear in mind that this is my own personal opinion, which of course is limited to the films I have seen so far.

Captain Von Trapp: You brought music back into the house. I had forgotten.

Kay Miniver: But in war, time is so precious to the young people.

Marty Piletti: You don't like her? That's too bad!

Ellen «Ellie» Andrews: I'll stop a car and I won't use my thumb.

And there you have it. My top 10 favorite Best Picture winners from 1929 to 1969.
Did I name some of your favorites? Were you surprised by my choices?