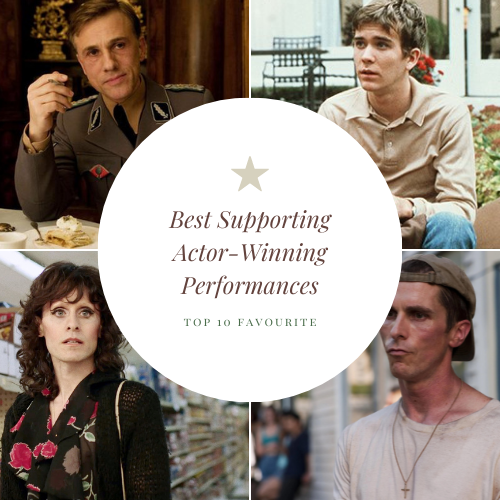 Throughout this month, just like I did last year, I have decided to do a series of Oscar-related articles in anticipation to the 90th Academy Awards ceremony, which will be held on March 4. To start things off, today I am sharing with you my top 10 favourite Best Supporting Actor-winning performances. Please bear in mind that this is my own personal opinion, which of course is limited to the films I have seen so far.
10. Jack Lemmon in Mister Roberts (1955)
Ensign Frank Thurlowe Pulver (Jack Lemmon): Captain, it is I, Ensign Pulver, and I just threw your stinkin' palm tree overboard! Now what's all this crud about no movie tonight?

9. Jack Nicholson in Terms of Endearment (1983)
Garrett Breedlove (Jack Nicholson): If you wanted to get me on my back, all you had to do was ask me.

8. Cuba Gooding Jr. in Jerry Maguire (1996)
Rod Tidwell (Cuba Gooding Jr.): Anyone else would have left you by now, but I'm sticking with you. And if I have to ride your ass like Zorro, you're gonna show me the money.

7. Robin Williams in Good Will Hunting (1997)
Dr. Sean Maguire (Robin Williams): Real loss is only possible when you love something more than you love yourself.

6. Christian Bale in The Fighter (2010)
Dicky Eklund (Christian Bale): You gotta win a title. For you, for me, for Lowell. This is your time, all right? You take it. I had my time and I blew it. You don't have to. All right?

3. Christoph Waltz in Inglourious Basterds (2009)
Colonel Hans Landa (Christoph Waltz): I love rumors! Facts can be so misleading, but rumors, true or false, are often revealing.

There you go. These are, as of now, my top 10 favorite Best Supporting Actor-winning performances. Were you surprised by my choices? Did I name any of your favorites?