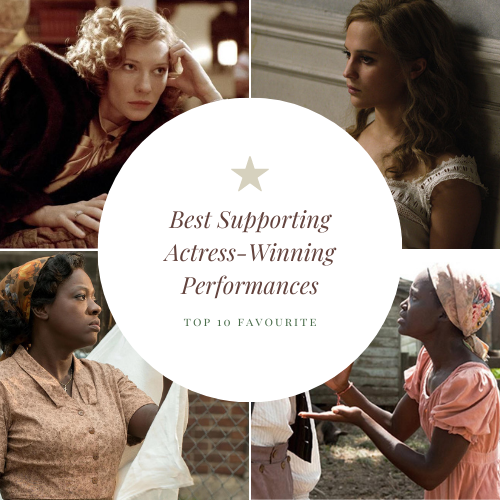 Throughout this month, just like I did last year, I have decided to do a series of Oscar-related articles in anticipation to the 90th Academy Awards ceremony, which will be held on March 4. Last week, I told you my top 10 favourite Best Supporting Actor-winning performances, so today I thought I would do the same, but for Best Supporting Actresses. Once again, please bear in mind that this is my own personal opinion, which is limited to the films I have seen so far.

9. Teresa Wright in Mrs. Miniver (1942)
Carol Beldon (Teresa Wright): I know how comfortable it is to curl up with a nice, fat book full of big words and think you're going to solve all the problems in the universe. But you're not, you know. A bit of action is required every now and then.

8. Anne Baxter in The Razor's Edge (1946)
Sophie Nelson-MacDonald (Anne Baxter): [Tipsy] Well, I'd better get back to my boyfriend. He'll raise the roof. He's a sulky brute, but quite a man.

5. Lupita Nyong'o in 12 Years a Slave (2013)
Patsey (Lupita Nyong'o): Mistress Epps won't even grant me no soap ta clean with. Stink so much I make myself gag. Five hundred pounds 'a cotton day in, day out. More than any man here. And 'fo that I will be clean.

3. Anne Hathaway in Les Misérables (2012)
Fantine (Anne Hathaway): I had a dream my life would be so different from this hell I'm living, so different now from what it seemed. Now life has killed the dream I dreamed.

2. Cate Blanchett in The Aviator (2004)
Katharine Hepburn (Cate Blanchett): You see, Howard, we're not like everyone else. Too many acute angles. Too many... eccentricities. We have to be very careful not to let people in or they'll make us into freaks.

1. Alicia Vikander in The Danish Girl (2015)
Gerda Wegener (Alicia Vikander): It's hard for a man to be looked at by a woman. Women are used to it, of course, but for a man to submit to a woman's gaze — it's unsettling. Although I believe there's  some pleasure to be had from it, once you yield.

There you go. These are, as of now, my top 10 favorite Best Supporting Actor-winning performances. Were you surprised by my choices? Did I name any of your favorites?