Classic Movie Fact of the Week #3: The First Sequel in Movie History 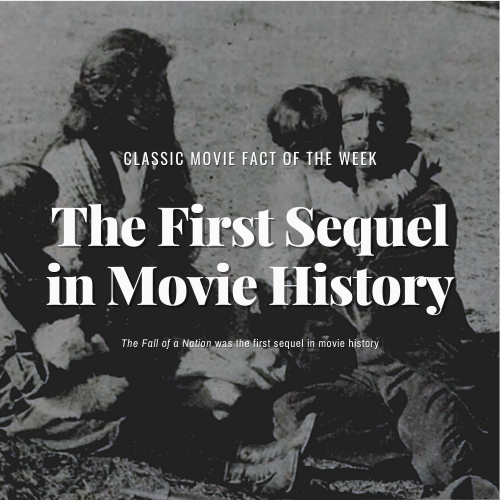 Did you know that...
The first sequel in motion picture history was The Fall of a Nation (1916), which is a follow-up to D. W. Griffith's epic drama The Birth of a Nation (1915).
Based on Thomas Dixon Jr.'s novel and play The Clansman, The Birth of a Nation changed the history of American cinema. With a cast that included Lillian Gish and future Oscar winner Donald Crisp, the three-hour film chronicled the relationship of two families during the American Civil War and Reconstruction era over the course of several years. The film was a great financial success, although it created a wave of controversy for its portrayal of black men as unintelligent and aggressive towards white women and the portrayal of the Klu Klux Klan as a heroic force.
Hoping to capitalize on the massive success of The Birth of a Nation, Dixon decided to adapt his novel The Fall of a Nation into a motion picture, which he also directed. Starring Lorraine Huling, Percy Standing and Arthur Shirley, the new film followed the same ideology of white supremacy as its predecessor, but within the context of a «call-to-arms» tale in the mid-War period. However, while The Birth of a Nation dramatized real-life events of the Civil War and Reconstruction era, the sequel focused on a hypothetical future where the pacifism of the United States nearly leads to its downfall. Set roughly between 1916 and 1919, The Fall of a Nation also touched on the issues of American invasion, woman suffrage and female emancipation.
The Fall of a Nation was neither a critical or commercial success and it was the only film produced by Dixon Studios before the company collapsed in 1921. As such, the picture was not widely preserved and no copies are known to exist. All that remains is a few stills and Victor Herbert's musical score, the latter of which is held in possession of the Library of Congress.
______________________________________________
SOURCES:
American Racist: The Life and Films of Thomas Dixon by Anthony Slide (The University Press of Kentucky, 2004)
D. W. Griffith's The Birth of a Nation: A History of the Most Controversial Motion Picture of All Time by Melvyn Stokes (Oxford University Press, 2008)
Film Sequels: Theory and Practice from Hollywood to Bollywood by Carolyn Jess-Cooke (Edinburgh University Press, 2009)