Hollywood at War: The Hollywood Canteen 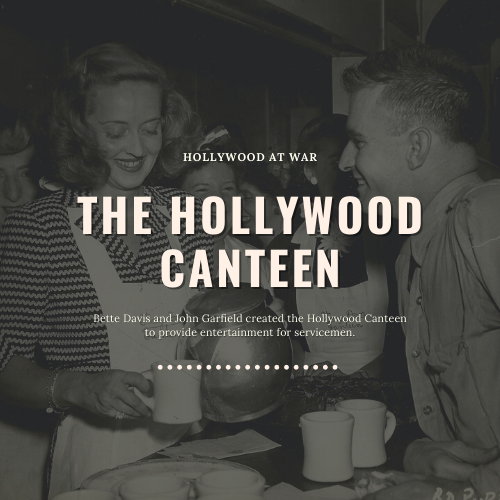 On December 7, 1941, as World War II was raging on in Europe, the Imperial Japanese Navy led a surprise military strike against the American naval base at Pearl Harbor, Hawaii. Commencing at 7:48 a.m. Hawaiian Time, the attack was carried out by 353 Japanese fighter planes, bombers and torpedo planes in two waves, launching from six aircraft carriers. All eight U.S. Navy battleships stationed at the base were damaged, with four sunk. All but Arizona, which exploded beyond repair after being hit by four armour-piercing bombs, were later raised and six were returned to service for the remainder of the war. The Japanese also sank or damaged three cruisers, three destroyers, an anti-aircraft training ship and one minelayer. In addition, 188 U.S. aircraft were destroyed, 2,430 Americans were killed and 1,178 others were wounded.
The attack on Pearl Harbor came as a profound shock to the American people and led President Franklin D. Roosevelt to declare war on the Empire of Japan on December 8. Three days later, both Nazi Germany and Fascist Italy, Japan's allies, reciprocated with a declaration of war against the United States, bringing the country fully into World War II.
After America effectively entered World War II, all Japanese employees of all the Hollywood studios were removed to so-called «relocation camps,» while thousand of technicians, drivers, actors and other industry professionals immediately enlisted in the armed forces. Within a few months, 70 percent of all Hollywood families had members in the military, including many movie stars who sacrificed their careers to serve their country. For instance, James Stewart and Clark Gable joined the Army Air Forces, Tyrone Power joined the Marine Corps, and Henry Fonda, Robert Montgomery, Wayne Morris and Douglas Fairbanks Jr. all enlisted in the Navy.