This week on "Film Friday", I bring one of the most romantic films of all time and a personal favorite of mine. It's a proper tearjerker this one.


Directed by Mervyn LeRoy, Random Harvest tells the story of Charles Rainier (Ronald Colman), a British officer confined to an asylum in the English countryside under the name of "John Smith", following a gas attack in the trenches during the First World War, which left him shell shocked and amnesiac. With the jubilation of Armistice Day, the asylum is left unguarded and he is able to escape. When he arrives in town, he meets a vivacious showgirl called Paula Ridgeway (Greer Garson), who nicknames him "Smithy" and nurses him back to health. The two soon fall in love and marry, settling in a cozy little cottage in the country where they live in blissful happiness for a few years.

On a business trip to Liverpool, Smithy is hit by a taxicab and his early memory is restored, but his happy years with Paula are forgotten. Although confused, Charles returns to his estate in London and begins managing the family business. He thrives as the "industrial prince of England", but he is haunted by his missing past and a naggish loneliness he does not understand. Hoping to extinguish that feeling, he decides to marry young Kitty Chilcet (Susan Peters), a close friend. However, when she realizes Charles is still in love with someone else, she breaks off the engagement. Meanwhile, Paula has been relentlessly looking for her Smithy. After seeing a picture of Charles in the newspaper, she manages to become his secretary, and later his wife, hoping that her presence will somehow make him remember her. After many lonely and frustating years, her dream is finally realized at their former cottage, surrounded by beautiful flowering cherry trees. 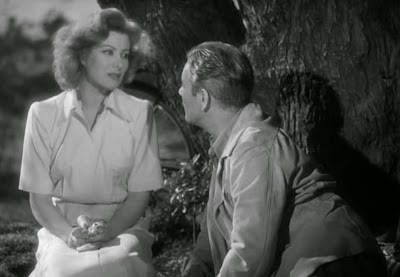 Paula: I've run after from the very beginning, you know I have. I've never let you out of my sight ever since I first saw you in that little shop.
Smithy: Never do it, Paula. Never leave me out of your sight. Never again.

Following the success of Goodbye, Mr. Chips (1939), also based in a novel by James Hilton, MGM producer Sidney Franklin jumped at the chance to buy the rights to Random Harvest as soon as it came out. Hoping to recreate the success they had had with Waterloo Bridge (1940), Franklin immediately assigned Mervyn LeRoy to the director's chair and production began in early 1942.


For the role of the leading lady, Franklin and LeRoy had no doubts as to who they should cast: the lovely "Mrs. Miniver" herself, Greer Garson. She was overjoyed with this new screen assignment, especially since the film would reunite her with the author that had made her a star and team her with Ronald Colman, the screen idol of her youth.


One reason I found Paula so interesting to play was that I believed in her. She was as muti-faceted as most human beings are [...] But more important even than the variety that gave color to the role was the fact that it was a sensitively written study of a woman's heart. Fidelity to human nature in such a story is more important to any thoughtful player than oportunities for showmanship.
(Greer Garson)

The role of Charles Rainier/Smithy was initially planned for Spencer Tracy, but when Franklin and LeRoy found out that Ronald Colman was available, they didn't waste the chance to cast him in the film. Besides, he too had previously appeared in another screen classic based on a James Hilton novel, Lost Horizon (1937), directed by Frank Capra.

Colman's own life and career remarkably paralelled the one of his character in Random Harvest. Like Charles, Colman too was a World War I veteran. He enlisted in London Scottish Regiment in 1909 and served in the Western Front, where he survived the bloody Battle of Ypres, only to have his ankle shattered by a shell explosion at Messines. The injury left him with a limp he would try to hide for the rest of his life and, like Charles, he felt lost and bitter after the war ended. Also like his character in the film, Colman escaped his melancholia through work and achieved great recognition with it.


When Random Harvest came along, Ronnie and Greer were the first choice for the role. It could have been written for them. Between the two of them, the English language was never spoken more beautifully on film.
(Mervyn LeRoy)

For the role of Kitty, Mervyn LeRoy cast 21-year-old newcomer Susan Peters, hoping to mentor her to stardom as he had previously done with Loretta Young, Ginger Rogers and Lana Turner. Though her performance was greatly acclaimed and earned her an Academy Award nomination for Best Supporting Actress, her success was shattered a few years later when she was permanently paralyzed from the waist down during a hunting accident on New Year's Day in 1945. Although she continued to make films and later worked on television, her condition left her in a state of severe depression, which ultimately contributed to her premature death in 1952, at the age of 31.

Upon its December 17 premiere, Random Harvest became an instant success and was among the top five highest grossing pictures of 1942. Made during the first full year in which the United States were involved in the Second World War, the film's success was partly due to its depiction of the effects of war in the home front and its affirmation of the importance of love and family life. Both Ronald Colman and Greer Garson, actually, were actively involved in the war efforts, taking part in whirlwind bond-selling tours and lending their voices to goverment radio broadcasts.

Random Harvest truly is an affirmation of love; the proof that if love is real and true and unconditional, it can survive anything. This was one of the first classic films I saw and it has stayed with me this whole time. And it just warms my heart to know that the people involved in it loved making it as much as I loved watch it.


We all got on so well, it was a wonderful picture to make. When he did the last scene at the cottage gate, which was also the last scene we filmed, Ronnie said to me, "This is one picture I hate to finish!"
(Mervyn LeRoy)