Since Easter is two days away, I thought it was only appropriate if this week on "Film Friday" I told you about an Easter film. Well, it has "Easter" in the title anyway.


Directed by Charles Walters, Easter Parade (1948) opens on a spring day in 1912, when dancer Don Hewes (Fred Astaire) learns that his partner, Nadine Gale (Ann Miller), wants to break up the act to star in a Broadway show as a soloist. Don, who is in love with Nadine, gets angry and heads to a bar to drown his sorrows. At the height of his drunkeness, he brags that he can make a star out of any common girl and selects Hannah Brown (Judy Garland), a girl at the bar, to be his new dancing partner. The following day, they meet for rehearsal, but Don struggles to teach Hannah his dance moves. Moreover, he tries to turn her into a copy of Nadine and even changes her stage name to "Juanita" to make her seem more exotic.

After they have a disappointing first public performance, Don realizes his mistake and decides to start over from scratch and create dance routines more suited to Hannah's personality. Meanwhile, Hannah meets Don's best friend, Jonathan Harrow III (Peter Lawford), who is instantly attracted to her. At dinner that night, Jonathan reveals his feelings for Hannah, but she tells him that she is actually in love with Don. A year later, with their act polished, Don and Hannah are finally signed to their first big show, which is set to open in New York on Easter. To celebrate the new contract, he throws her a romantic dinner and confesses he is in love with her too. They give a stellar performance on opening night and afterwards Don takes Hannah to see Nadine's show in the Ziegfeld Follies. When Don agrees to dance with Nadine for old times' sake, Hannah concludes that he is still in love with his former partner and leaves the theater. A series of misunderstandings further alienates Don and Hannah, but Jonathan intervenes and eventually forces a reconciliation. As they walk arm in arm in the Easter Parade, Don proposes to Hannah. 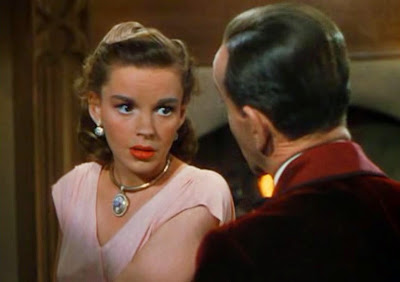 Don Hewes: Why didn't you tell me I was in love with you?

For much of 1947, MGM producer Arthur Freed had been focused on The Pirate (1948), a lavish Caribbean musical fantasy starring Judy Garland and Gene Kelly. Impressed with the "stylistically imaginative" rushes, Freed planned to immediately re-team Garland and Kelly. The vehicle he chose was Easter Parade, the studio's most recent production to be conceptualized around Irving Berlin's prolific songbook. In 1946, the composer and lyricist had approached 20th Century Fox about making a film based on the catalogue of songs, but it was MGM who eventually moved forward with the project. Garland and Kelly would be joined by The Pirate director Vincente Minnelli, her husband at the time, coreographer Robert Alton, the married writing team of Frances Goodrich and Albert Hackett and cameraman Harry Stradling.

Unfortunately, Garland's participation in The Pirate was marred by marital disagreements, the pressures of first-time motherhood (with baby Liza) and overmedication. After completing the film in July 1947, Garland made her first suicide attempt and was subsequently placed in a psychiatric treatment facility for two weeks. To avoid problems during the making of Easter Parade, Freed decided to replace Minnelli with Charles Walters, a former dancer who had been Garland's partner in the finale of Presenting Lily Mars (1943) and had to his credit only one relatively small film, the recently completed Good News (1947), starring June Allyson and Peter Lawford. "Arthur told me he was going to give me the film," Walters later remembered. "I almost cried. It was a big film with a fat budget, and instead of June Allyson, I had Judy Garland and Gene Kelly. It's a little like passing one day to the next from the Bronx to the Palace Theatre."

As soon as he was hired in September 1947, Walters started attending dance rehearsals, which were already under way. Kelly teased him about "making it to the big leagues," while a rejuvenated Garland joked: "Look, Buster, you're in the big time now. You're not doing a little college musical here. I'm not June Allyson, you know. Don't get cute with me — none of that batting the eyelids bit of fluffing the hair routine for me, buddy! I'm Judy Garland and you just watch it." Walters played along with her charade by responding with a mock bow.

Berlin, however, was not pretending when he voiced his opposition to Walter's assignment. He had been a vital participant in pre-production and anticipated a generous percentage of the film's eventual profits, so he was not pleased to learn that a former Broadway dancer had been put in charge of Easter Parade. Berlin discussed the matter with MGM chief Louis B. Mayer, but was unable to convince to hire a different director. According to Freed, Berlin returned home to New York after the meeting with Mayer and "when he came back about four or five weeks later, we ran [some] stuff for him. [Irving] said: 'You were right.'"

Walters encountered another problem once he read the screenplay developed by Goodrich and Hackett. "It was terrible, it was heavy," he explained. "Gene's character [verbally] beat the shit out [Judy]." He also complained about the way Garland's role was crafted: "The script completely matyred her, and it was neither refined nor pleasant." As a result, Freed took Walters's suggestion that he hire young writer Sidney Sheldon, who would soon win an Academy Award for The Bachelor and the Bobby-Soxer (1947), to collaborate with him to soften the dialogue and give the film a more upbeat tone. Setups for Berlin's tune were also restructured; for instance, Garland's reprise of "It Only Happens When I Dance With You" would now end with Don realizing that he loves Hannah, rather than (as originally scripted) with him becoming suddenly angry as he recalls his former partner's selfishness.

Easter Parade faced one more difficulty when Cyd Charisse, who was supposed to have her first major film role playing Nadine Hale, tore a ligament in her foot during rehearsal and was forced to withdraw from the project. To replace her, Mayer immediately recommended Ann Miller, a personal favorite of his. A tap-dancer since childhood, Miller lied about her age to get RKO to sign her to a contract in 1937 (she told them she was 18 when in reality she was barely 14). While at RKO, she was featured in supporting roles in such pictures as Frank Capra's You Can't Take It With You (1938) and William A. Seiter's Room Service (1938). In the early 1940s, she moved to Columbia and appeared in such World War II "morale boosters" as True to the Army (1942) and Reveille with Beverly (1943). After the war, she signed with MGM and, beginning with Easter Parade, finally hit her mark in Hollywood, co-starring in successful musicals like On the Town (1949) and Kiss Me Kate (1953). Miller's numbers in Easter Parade include "Shakin' the Blues Away" and "The Girl on the Magazine Cover."

Dance duties on Easter Parade were split between Alton, who developed eleven numbers, and Walters, who coreographed nine, including "Mr. Monotony," a key solo for Garland — dressed in tuxedo jacket, hose and fedora hat — that was eventually cut from the finished film. He also staged "A Couple of Swells," which presented Garland and Kelly garbed in "raggedy-tramp" outfits, deriding the aristocratic class, a number that was supposed to be an encore to their "Be a Clown" from The Pirate. Walters additionally supplied the introductory portion of "I Love a Piano," but noted that Alton "took it  from [apartment to stage] with a key change and did the full vaudeville montage. [...] That's how in sync we were in our thinking."

After Peter Lawford replaced Frank Sinatra as Jonathan Harrow III, a final, major catastrophe occurred. On October 12, a month into rehearsals, Kelly fractured his ankle while playing volleyball (or football, or baseball, depending on the source) and was told he would be unable to dance for six to eight months. Freed briefly considered hired Gene Nelson to take over his role, but then decided he needed a bigger name to work with Garland.

Two days after Kelly's accident, Fred Astaire agreed to play Don Hewes in Easter Parade. The veteran hoofer had retired in late 1945 after completing Irving Berlin's Blue Skies (1946), but soon grew restless. Persuaded by the chance to work with Garland — and a generous $150,000 fee — the 48-year-old Astaire was keen to return to a movie set. Luckily, Sheldon's lightened screenplay needed little alteration for its new leading man, with Walter admitting, "It was even better for Fred than it was for Gene.

I couldn't contain my joy. [Astaire] was my hero, my idol. I could not get over the fact that I was going to work with him. I will never forget the moment when, while we were trying out wardrobe, Fred approached me — in that elegant way that only he has — and asked what I thought of [his] jacket and vest. I said, "You're kidding. You're asking me?" He was clearly delighted.
(Charles Walters)

Principal photography on Easter Parade took place between late November 1947 and mid-February 1948. In December, Garland was called to re-shoot a dozen portions of The Pirate, including a new arrangement of "Mack the Black." That same month, she also filmed several numbers for Easter Parade: "A Couple of Swells," "I Love a Piano," "Snookey Ookums," "Ragtime Violin," "I Want to Go Back to Michigan" and "When the Choo-Choo Leaves for Alabam'." Despite the hectic schedule, Garland's spirits remained high and the atmosphere on the set was extremely relaxed, in sharp contrast to the tension that pervaded any Minnelli production. Filming concluded with the celebratory title song on MGM's recreation of New York's Fifth Avenue.

Judy's the greatest entertainer who ever lived — or probably ever will... and amazing girl. She could do things — anything — without rehearsing and come off perfectly. She could learn faster, do everything better than most people. It was one of the greatest thrills to work with her.
(Fred Astaire)

Despite all the setbacks, Walters managed to finish Easter Parade a week ahead of schedule and $191,280 under its $2,503,654 budget. The film opened at Loew's State Theatre in New York on June 30, 1948 to unanimous praise. McCall's considered that "such entertainment has seldom been seen and certainly not heard in this splendid guise," while the Hollywood Reporter applaued Walters's "effortless" direction and his "painstaking effort to make every line and every turn of the fragile plot as feathery light as an Astaire dance step."

For his part, Thomas M. Pryor of The New York Times highlighted the use of Technicolor and Irving Berlin's tunes, particularly "A Couple of Swells," adding, "Easter Parade may not strike the perfect balance between song-dance interludes and story, but it's an appealing show just the same." At the end of the year, Look magazine selected the film as one of the screen's "top achievements for 1948," aligning it with Laurence Olivier's Hamlet (1948), Howard Hawks's Red River (1948), Victor Fleming's Joan of Arc (1948) and John Huston's The Treasure of Sierra Madre (1948). At the 21st Academy Awards, Johnny Green and Roger Edens received the Oscar for Best Original Score.

With earnings in excess of $6,803,000, Easter Parade was MGM's top-grossing picture of the year and the biggest moneymaker for both Fred Astaire and Judy Garland. Astaire considered Easter Parade "a lucky break for me when I wanted it. My comeback had been completed." Indeed, the film started a new ten-year association between Astaire and MGM, which went on to produce some of the biggest hits for both parties, including Three Little Words (1950) and The Band Wagon (1953). In the late 1950s, he branched out into televised dance and straight acting, gracing screens big and small for another twenty years.
Happy Easter, everyone!