Films I Saw in January 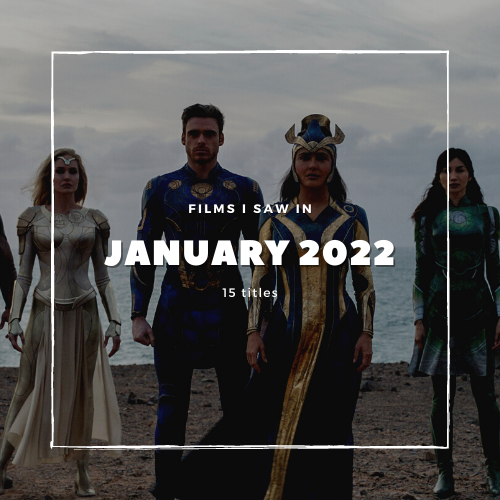 Since 2016 I have been sharing a list of all the films I saw throughout the year. In 2021 I decided to start doing this monthly and I will continue doing so this year. These are the films I saw in January, which make up a total of 15 titles. Films marked with a heart (❤) are my favourites.
Of the 15 films I saw in January, the one that stood out to me was Eternals. The cinematography and the visual effects were outstanding! The fighting sequences were really well done and the cast was amazing. I loved that it was so ethnically diverse and that they kept the actors' real accents. I loved Richard Madden as Ikaris, and I liked that he had a scene with Kit Harrington. It was a nice little Stark brothers reunion. I certainly did not expect him to turn out to be the villain of the story, but in the end it was his love for Sersi that redeemed him in a way. I think that was actually the whole point of the film, how complex relationships can be and how love can both destroy us and save us, and how we all long for that human connection.

Another thing I loved about Eternals was Druig and Makkari. They were so cute together! When she screamed after she thought Druig was dead... That broke my heart. I would pay good money to see a film with just the two of them. Or any film starring Barry Keoghan and Lauren Ridloff, really. Also, I think it was really cool that they cast a deaf actress to play Makkari.
And then there was that post-credits scene. Honestly, I cannot even describe the sound that came out of my mouth when I saw Harry Styles. It was so unexpected! I really they hope they make a sequel because I really want to see more of him in the MCU.