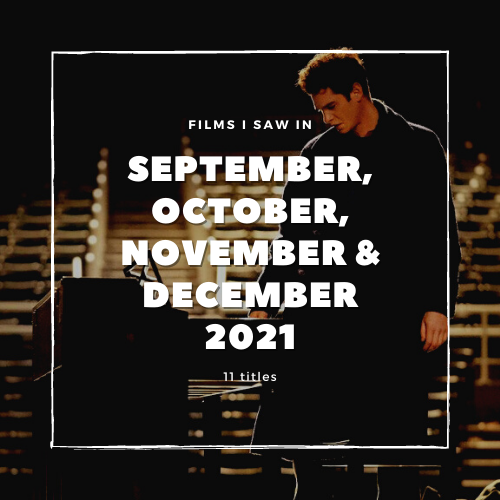 In the past five years, I shared a year-end list of the films I saw throughout 2016, 2017, 2018, 2019 and 2020. For 2021, I decided to do this monthly and share a list of the films I saw during each month of the year. These are the films I saw in September, October, November and December, which make up a total of 11 titles. Films marked with a heart (❤) are my favourites.
The last four months of 2021 were pretty slow in terms of movie watching. I mostly just watched TV shows, namely The Crown, Midnight Mass, Squid Game, Normal People, Goblin, Gloria, Touch Your Heart, the final season of Money Heist, season two of The Witcher, Impeachment: American Crime Story and The Wheel of Time.
In terms of films, I watched only 11 during this period. The one that really stood out for me was tick, tick... BOOM!. It's based on the semi-autobiographical stage play of the same name by Jonathan Larson, who went on to write the Broadway musical Rent. Andrew Garfield stars as Larson and he is magnificent. Lin-Manuel Miranda did a wonderful job as director and the entire cast is just excellent.