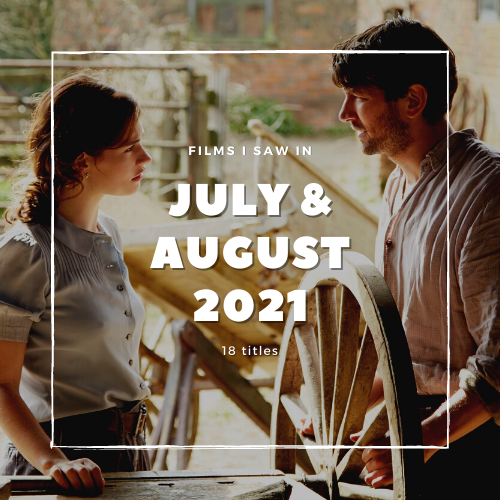 In the past five years, I shared a year-end list of the films I saw throughout 2016, 2017, 2018, 2019 and 2020. For 2021, I decided to do this monthly and share a list of the films I saw during each month of the year. These are the films I saw in July and August, which make up a total of 18 titles. As always, films marked with a heart (❤) are my favourites.
Out of the 18 films I saw in July and August, three stood out for me: The Guernsey Literary and Potato Peel Pie Society, Sublet and Palmer.
I had been wanting to watch The Guernsey Literary and Potato Peel Pie Society for some time, but I wanted to read the book first. So, in August, I finally did both, and I loved both the book and the film. The story is set in 1946 and follows a London-based writer named Juliet Ashton who exchanges letters with a resident on the island of Guernsey, Dawsey Adams. Through these letters, Juliet learns of the hardships that the islanders faced under German occupation during World War II and of the existence of a book club named «The Guernsey Literary and Potato Peel Pie Society.» She becomes so interested in their stories that she decides to go to Guernsey to meet Dawsey and his friends in hopes of writing about them.
This is one of the loveliest films I have ever seen and one of those I wish were three hours long. I loved every single person in the cast, especially Lily James and Michiel Huisman, who are just the cutest thing as Juliet and Dawsey. I liked that the script is more or less loyal to the book, although there were some details I wish they had included, like the friendship between Sidney, Juliet's publisher, and Isola Pribby, an islander and book club member.

Another film that I loved was Sublet. It's about an American travel writer, Michael Green, who goes to Tel Aviv for work. Instead of staying at a hotel, he sublets an apartment in a popular neighbourhood from a young film student named Tomer. Their age gape and disparate personalities is, at first, a source of conflict between them, but as they spend more time together, they develop a really close relationship that puts their life philosophies into perspective.
I don't know how I ever came across this, but I am so glad I did. John Benjamin Hickey gives a really beautiful and heartfelt performance as Michael, and Niv Nissim, who plays Tomer, is just as amazing. I rooting for them to end up together, but the film's actual conclusion is much perfect.

Lastly, there's Palmer. The film is a about an ex-convict named Eddie Palmer, who has just got out of prison after 12 years. He moves in with his grandmother, Vivian, who occasionally watches over a flamboyant young boy named Sam. When Vivian dies, Palmer is forced to became Sam's temporary guardian with his drug-addict mother constantly out of town. Initially, Palmer doesn't want anything to do with Sam, but eventually bonds with him.
I didn't really know what to expect of this film (I watched it purely because I like Justin Timberlake as an actor), but I ended up really enjoying it. The basic storyline is not particularly groundbreaking, but the performances are what makes Palmer a good film. Justin Timberlake is amazing in the lead role, and Ryder Allen is simply beautiful as Sam.