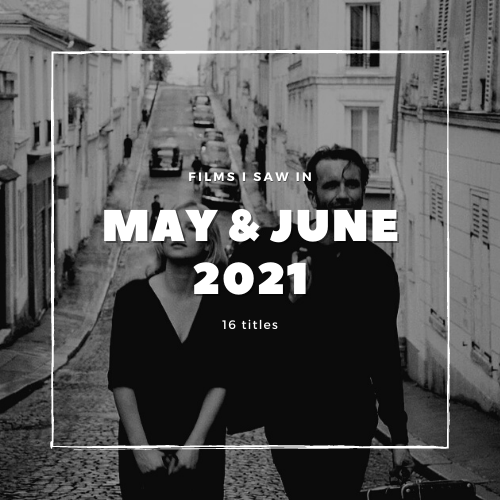 In the past five years, I shared a year-end list of the films I saw throughout 2016, 2017, 2018, 2019 and 2020. For 2021, I decided to do this monthly and share a list of the films I saw during each month of the year. These are the films I saw in May and June, which make up a total of 16 titles. As always, films marked with a heart (❤) are my favourites.
In May and June I watched a total of 16 films. It's not a lot, I know, but I think it's still a fairly decent amount. Of those 16, I have four favourites that I want to tell you about.
First up, Persian Lessons. It's a Russian-Belarusian films about a Jewish man in a German concentration camp who pretends to be from Iran and is then forced to teach Persian (a language he does not speak) to a Nazi. I love World War II films and this one has become one of my favourites, in great part due to the outstanding performances of the two lead actors, Nahuel Pérez Biscayart and Lars Eidinger.

Next, there's No Hard Feelings, a German film about a gay young man of Iranian descent living in Germany, who commits a minor criminal infraction and is sentenced to perform community service at a refugee detention centre, where he falls in love with a new immigrant. I'm not sure exactly how I came across this film, but I'm glad I did because it's so good! And again, the lead actors (Benjamin Radjaipur, Eidin Jalali and Banafshe Hourmazdi) are excellent.

Then we have Cold War, a Polish film that follows the love story between a musical director and a young singer from the late 1940s until the 1960s. If you're going to watch any film from this list, please watch this one. It's one of the most tragically beautiful films I have ever seen. The two leads, Tomasz Kot and Joanna Kulig, are wonderfully matched and the black-and-white cinematography makes the film ever more stunning.

Lastly, there's Tolkien, which is about the early life of J. R. R. Tolkien, the author of The Hobbit and The Lord of the Rings. Now, this is not the greatest film ever made — nor, I'm sure, the greatest film they could have made about Tolkien's life — but I actually found it really moving and I really liked Nicholas Hoult's performance.

And that's it. These are the films I watched in May and June. Have you seen any of the films I mentioned?