Films I Saw in April 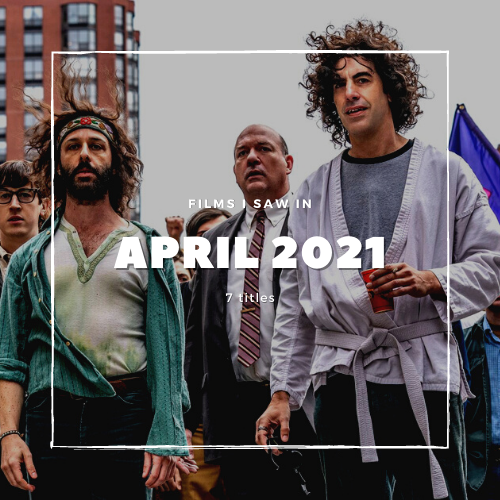 In the past five years, I shared a year-end list of the films I saw throughout 2016, 2017, 2018, 2019 and 2020. For 2021, I decided to do this monthly and share a list of the films I saw during each month of the year. These are the films I saw in April, which make up a total of 7 titles. As always, films marked with a heart (❤) are my favourites.
April was a slow month in regards to movie watching on my part. I only watched 7 films, all of which were nominated for this year's Academy Awards. My favourite of the bunch was definitely The Trial of the Chicago 7, written and directed by the genius that is Aaron Sorkin.

The film follows a group of anti-Vietnam War protesters charged with conspiracy and crossing state lines with the intention of inciting riots at the 1968 Democratic National Convention in Chicago. The incredible ensemble cast includes Eddie Redmayne as Tom Hayden, leader of the Students for a Democratic Society; Sacha Baron Cohen as Abbie Hoffman, founding member of the Youth International Party; Mark Rylance as William Kunstler, one of the defense counsels for the Chicago Seven; Joseph Gordon-Levitt as Richard Schultz, one of the prosecutors; and Frank Langella as Judge Julius Hoffman (no relation to Abbie), who is presiding over the trial.

I think The Trial of the Chicago 7 might be my number one favourite film of 2020. Aaron Sorkin is an expert storyteller and I love how he structured the film, going back and forth between the trial and the events that led up to it. Everyone in the cast is also outstanding, especially Sacha Baron Cohen, who just «steals the show,» as some reviewer put it. I only knew him from his comedy stuff, which I'm not really a fan of, but I was mesmerized by his performance as Abbie Hoffman. Even though I think Daniel Kaluuya was amazing in Judas and the Black Messiah (2020), if it had been up to me, Sacha Baron-Cohen would have won that Oscar.
And that's it. These are the films I watched in April. Have you seen any of them?