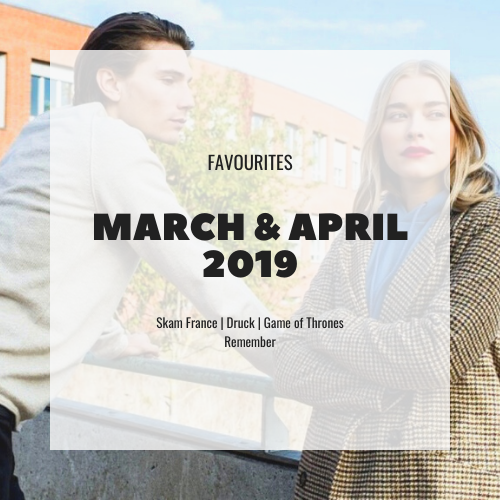 I have always wanted to do a «monthly favourites» type of post on this blog, but I kept putting it off some reason or the other. Last year, though, I finally decided to do it. I will be doing one of these every month (or every two months) and I will include literally everything that I have loved or that has made me happy during that time, be it a film, a song, a book, a TV show or even an item of clothing. Here are my March and April favourites.

I know I named Skam France my favorite TV show in February, but it continued to be one of my favorite in March and April. It is so good! It's currently in the fourth season and it's supposed to end after that, but I'm still hoping that they make at least two more seasons.

Druck is the German version of Skam and I am slightly in love with it as well. Like Skam France, Druck took the original storyline and put their own spin on it. The French version is still my favourite remake of the original show, but Druck is really good as well.

I've been watching Game of Thrones since the very beginning and I can't believe it's coming to an end. There's only three episodes left before the finale and I'm already dreading it. I don't know what I'm going to do without Jon, and Pod, and Davos (yes, I love Davos), and Sam, and Jamie and Brienne, and Gendry and Arya... By the way, how badass is Arya? She killed the Night King! It basically took her two seconds to do what Jon has been trying to do for two seasons.

This appeared in last scene of episode 3x09 of Skam France and I was obsessed with it for days afterwards. It's a beautiful song and it fitted the scene (and the show) perfectly.

And that's it. These are the things that I love/was obsessed with throughout March and April.
What are some of your favorite things right now?