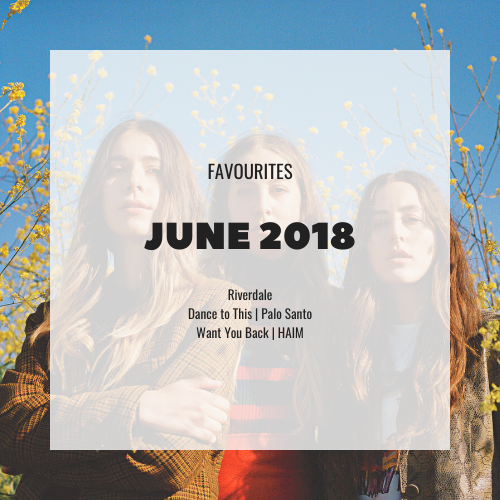 I have always wanted to do a «monthly favourites» type of post on this blog, but I kept putting it off some reason or the other — until this year. I will be doing one of these every month (or every two months) and I will include literally everything that I have loved or that has made me happy during that time, be it a film, a song, a TV show or anything else. These are my June favourites.

Riverdale is not the kind of show I usually go for, but EVERYONE was talking about it, so I thought I would give it a try. And guess what? I loved it! It's not the greatest show in the world (far from it), but it is very enjoyable. I haven't finished season two yet, so please no spoilers.

2. «Dance to This» by Troye Sivan & Ariana Grande

I love Troye Sivan, but I am not really a fan of Ariana Grande, so when I heard that they had made a song together, I didn't know what to expect. As it turns out, the song is amazing. It has a very 80s vibe to it that I absolutely love. I hope they make a music video to go with it.

Years & Years are one of my favorite bands, but I was a bit underwhelmed by their first two singles out of the new album. «Palo Santo», on the other hand, is fantastic!

I discovered HAIM exactly a week ago, when they played at Rock in Rio Lisbon 2018, and I cannot stop listening to them. I've listened to both of their albums several times (I particularly like the second one) and this song is definitely my favourite. It's so good!

I don't listen to female artists (there's no particular reason for that, I just don't), but I am slightly obsessed with HAIM at the moment. They are so brilliant! Like I said, I've been listening to them pretty much non-stop for about a week and I cannot get enough of them. They are incredibly talented and they actually dress like normal people, unlike most female artists nowadays.

6. The «Want You Back» music video by HAIM

Oh, look. Another HAIM-related favorite. I told you I was a bit obsessed. But honestly, this is one of the best music videos I have ever seen in my life. It's so simple, but so good.

And there you go. These are all the things I have loved throughout June. I am perfectly aware that half of them are HAIM-related, but what can I say? Those girls are brilliant.