Directed by Michael Lindsay-Hogg, Let It Be (1970) observes The Beatles from a "fly-on-the-wall" perspective, without any kind of narrative, scene titles or interviews, as they rehearse and record song for the album Let It Be. The documentary opens with the band rehearsing on a sound stage at Twickenham Film Studios. The songs are still works in progress and numerous run-throughs take place as the group gradually shapes them, breaking off for discussions on how to improve both music and lyrics in between. Highlights include an argument between Paul McCartney and George Harrison over a guitar riff in "Two of Us"; an improvised piano boogie duet featuring Paul and Ringo Starr; and John Lennon and Yoko Ono dancing while Harrison sings "I Me Mine."

Next, we see the band arriving at Apple Studios, where they begin the recording process for Let It Be. Ringo and George work on "Octopus's Garden" and then demonstrate it for producer George Martin; the band covers "Bésame Mucho" and "Shake, Rattle & Roll" accompanied by Billy Preston; Paul's six-year-old stepdaughter, Heather, plays around the studio; and "Two of Us," "Let It Be" and "The Long and Winding Road" finally come together. In the third and final portion of Let It Be, the band is shown giving an impromptu concert atop the Apple building in London. They perform "Get Back," "Don't Let Me Down," "I've Got a Feeling," "One After 909" and "Dig a Pony," while people come across rooftops and gather on the streets below staring upwards. At one point, the police make their way up to the roof and try to bring the show to a close, but the concert goes on according to plan and the final song is followed by applause from the crowd. 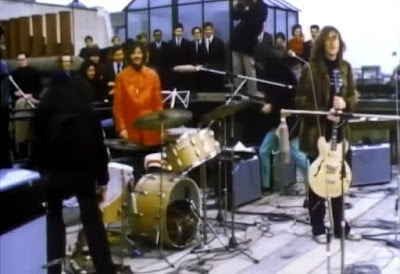 John Lennon: I'd like to say 'thank you' on behalf of the group and ourselves, and I hope we passed the audition.


During the recording sessions for their self-titled album, commonly known as the White Album, relations within The Beatles grew openly divisive, as they were increasingly becoming individualised artists. At one point, Ringo Starr even left the band for nearly two weeks, feeling that tensions among them had grown to high for him to keep working. After the stressful sessions concluded in October 1968, Paul McCartney, who was desperate to perform in front of a crowd again, began talking of different tours they could do, but the other three Beatles were completely against it. Paul then suggested they give just one big show featuring new songs, which they could then record and release as a live album. As an introduction to the concert, there would also be a short documentary showing them in rehearsals, to be released as a television special entitled "Beatles at Work."


Many ideas were discussed regarding the location of the concert, including an ocean liner and a two-thousand-year-old Roman amphitheater in Tunisia. Since the four of them were unable to come to a unanimous decision, and with time limited by Ringo's upcoming commitment to the film The Magic Christian (1969), they decided to proceed with rehearsals and wait for the perfect idea to present itself. To facilitate filming, it was agreed that rehearsals would take place at Twickenham Film Studios in London. Paul's initial suggestion was that Yoko Ono might direct the film, as that seemed to be the perfect way of giving her the respect John demanded as well as getting her away from him while the band was at work. But Yoko, who considered herself to be an avant-garde filmmaker, had no interest in shooting a straight documentary. Eventually, the job was offered to Michael Lindsay-Hogg, Orson Welles' illegitimate son and a gifted young television director whose association with The Beatles dated back to their "Paperpack Writer" promotional film in 1966.


Aside from Paul, motivation was terribly low within the group when shooting for the "Beatles at Work" footage began on January 2, 1969. They were still exhausted after the lenghty sessions for the White Album, which had ended just eleven weeks before, and the presence of film cameras during rehearsals only increased the tension. The greatest change Lindsay-Hogg noticed was in Lennon and McCartney's creative relationship: instead of working together, like they had always done, one of them would write a song individually and just tell the others how to play it. "It was obvious that Paul was the driving force behind the project, and that the other three didn't really want to be there," Lindsay-Hogg later recalled. "Paul would always be the one to check in on time every morning, and he was the only one I ever really discussed the filming with. The others would arrive between one and two hours late. On a couple of days, John didn't turn up at all."

Paul had grown overbearing over his music and was constantly correcting the others, especially George, to whom he would give precise instructions on the phrasing of his guitar breaks. Eight days into rehearsals, George finally reached his breaking point. Tired of being bossed and bullied by Paul and struggling to get his songs accepted by the others, George walked out on the band and went back to Liverpool. Paul and Ringo were shocked by his departure, but John dismissed the situation, suggesting they replace him with Eric Clapton. "They were filming us having a row," George said. "It never came to blows, but I thought, 'What's the point of this? I'm quite capable of being relatively happy on my own and I'm not able to be happy in this situation. I'm getting out of here.' [...] It was very, very difficult, stressful time, and being filmed having a row as well was terrible."


Five days after George left, all four Beatles held a meeting. George made it clear that he would only return if they moved the sessions from Twickenham to their own Apple Studios and dropped the idea of playing a concert for a live audience. He did, however, agree to let Lindsay-Hogg continue filming him making the album and to eventually perform a live show in some form. Around this time, it was also decided that the footage being shot for "Beatles at Work" would be used to make a feature film instead of a television special. On January 21, after a week's rest, the band left the bleakness of Twickenham and relocated to Apple's headquarters in Savile Row, London, continuing work in the studio that had been installed in the basement. For their new project, the band decided to go for a more intimitate style, completely stripped of production, hoping the recreate some of the fun and spontaneity of their early days in Liverpool and Hamburg.

With a clearer objective in mind, the mood within the sessions was greatly improved. The four of them were more relaxed and the atmosphere was lighter and more playful. For a moment it felt as though they were connecting again — Paul's dictatorship over the music seemed to be gone; George was finally able to get his songs heard; and from time to time they would jam every number ranging from rock 'n' roll classics and old Beatles tracks to show tunes and nursery rhymes. But tension soon began creeping back in and the recording sessions became tedious affairs. "It all began to feel like Satre's play No Exit," Lindsay-Hogg remembered, "characters trapped together in a room, uncertain why they were there and not knowing out to get out. There didn't seem to be any way of stopping it."

On January 29, while discussing ideas for the film's finale, Lindsay-Hogg suggested the band do an unannouced concert on the roof the Apple building. All four Beatles loved the idea and the performance was scheduled to the very next day. January 30, 1969 was a dull and cold Thursday, with a biting wind and a suspicion of fog that ruled out Lindsay-Hogg's idea of having a helicopter sequence. Beginning at around midday, the show coincided with the lunch hour of many nearby workplaces, which led to crowds quickly forming, both on the streets below and on the surrounding walls and parapets.

They opened the concert with Paul's "Get Back," whose title was supposed to sum up their entire back-to-the-roots project and serve as the name of both the film and the album. John came up next with his ballad "Don't Let Me Down," sung in perfect harmony with Paul. The third number was "I've Got a Feeling," a Lennon-McCartney collaboration made up of two half-finished songs joined together, representing the differences in the two men's lives at that point. After reviving one of their earliest songs, "One After 909," and performing John's nonsensical "Dig a Pony," they closed the show with a spirited reprise of "Get Back," as the police made their way to the roof and ordered them to stop playing. "You've been playing on the roofs again, and that's no good, and you know your mummy doesn't like that... she gets angry... she's gonna have you arrested! Get back!" Paul brilliantly ad-libbed.

During the 42-minute impromptu concert, "the love they shared for their music and for one another lit up their faces and electrified their bodies." Even with the disapproving glare of the authorities on their necks, they were in their element, happier than they had been in a long time, and looked as if they could go on all day. "That was one of the greatest and most exciting days of my life," tape operator Alan Parsons later recalled. "To see The Beatles playing together and getting an instant feedback from the people around them, five cameras on the roof, cameras across the road, in the road, it was just unbelievable." That was the very last live performance by The Beatles.


At the end of the month, Lindsay-Hogg had over 90 hours of footage from the gloomy Get Back sessions, which took the best part of a year to edit. In early 1970, it was decided to change to name of the film and the associated album from Get Back to Let It Be to match the band's March single release. By the time Let It Be and its soundtrack were released in May 1970, The Beatles had officially split up. None of them attended any of the premieres, nor did they travel to Hollywood to accept the Academy Award for Best Original Score.

Although the Get Back/Let It Be sessions resulted in one of the most iconic moments in music history, and although they got together again in the meantime to record another album, Abbey Road, and add some finishing touches to Let It Be, those three weeks Paul, John, George and Ringo spent together in January 1969 were nothing more than the complete realization that their relationship as friends and musicians was desintegrating. In the end, Let It Be was not a film about the making of an album; it was a film about a band breaking apart. The talent and ability to give a good performance was obviously still there, but the magic and almost supernatural chemistry they had once shared was completely gone. What we see in Let It Be is not The Beatles anymore, but four individual artists, "four souls trying to break free from one another." For a Beatles fan, Let It Be is a sad and heartbreaking film to watch. Not because you know that it was the end of arguably the greatest band of all time, but because you know that they knew that it was the end. As Kate Siobhan Mulligan wrote, "It was the end of an era, and the end of The Beatles. But it was just the beginning of the legend." In case you are still wondering, John... yes, you passed the audition.

This post is my contribution to The Beatles Film Blogathon hosted by Movie Movie Blog Blog. To view all entries, click HERE. 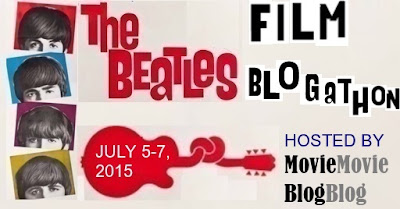