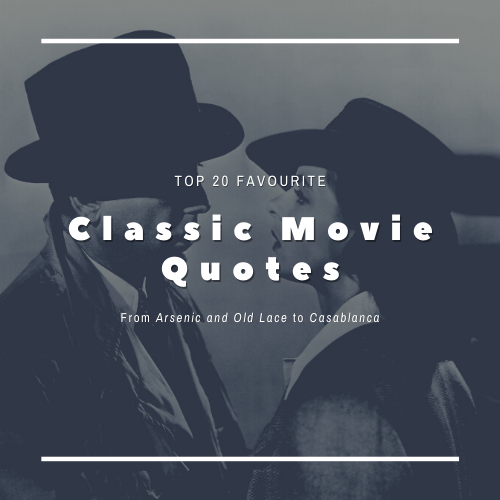 Whether it's a funny remark, an inspirational phrase or a terribly romantic line, I love a good movie quote. Although I'm not very good at ranking my favourite things, since I change my mind faster than I flip pancakes, I thought it would be fun to compile my top 20 favourite classic movie quotes. These are quotes that have stayed with me ever since I watched these films. I know every single one of them by heart, and some I even quote myself from time to time. Some are extremely well-known, others are just lines that I really love. There is even a quote from a silent film in this! Obviously, all of my choices are restricted to the films that I have seen so far.
20. Insanity runs in my family. It practically gallops!
Cary Grant as Mortimer Brewster in Arsenic and Old Lace (1944)

18. You're a ponctificating old poop!
Spencer Tracy as Matt Drayton in Guess Who's Coming to Dinner (1967)

17. Susan, when a man is wrestling a leopard in the middle of a pond, he's in no position to run.
Cary Grant as David Huxley in Bringing Up Baby (1938)

16. Say, where'd you learn to dunk? In finishing school?
Clark Gable as Peter Warne in It Happened One Night (1934)

15. I am big! It's the pictures that got small.
Gloria Swanson as Norma Desmond in Sunset Boulevard (1950)

13. I've been running the crap game since I was a juvenile delinquent.
Frank Sinatra as Nathan Detroit in Guys and Dolls (1955)

12. Get it out of Manton? Don't make me laugh. This tastes too good to choke on.
Henry Fonda as Peter Ames in The Mad Miss Manton (1938)

11. I loved you from the first moment I saw you, and you knew it.
Gary Cooper as Howard Roark in The Fountainhead (1949)

9. Did you think you were God, Brandon?
James Stewart as Rupert Cadell in Rope (1948)

7. What is it that you want, Mary? Uh? What do you want? You... you want the moon? Just say the word and I'll throw a lasso all around it and pull it down. Hey, that's a pretty good idea. I'll give you the moon, Mary.
James Stewart as George Bailey in It's a Wonderful Life (1946)

3. You don't understand! I coulda had class. I coulda been a contender. I coulda been somebody, instead of a bum, which is what I am, let's face it.
Marlon Brando as Terry Malloy in On the Waterfront (1954)

1. Here's looking at you, kid.
Humphrey Bogart as Rick Blaine in Casablanca (1942)

And this is it. These are my top 20 favorite classic movie quotes. What are your favorite movies quotes? Did I list some of them? Were you surprised by some of my choices?