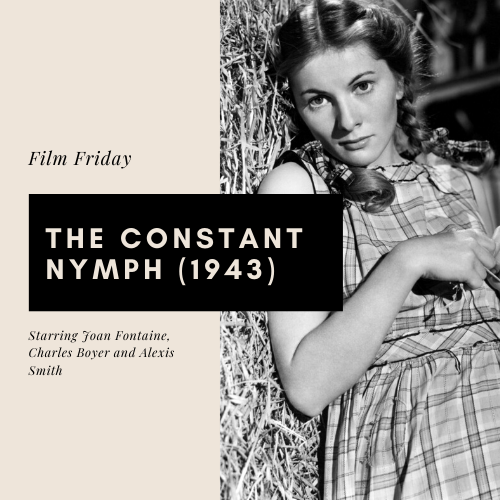 In honor of Joan Fontaine's 99th birthday, which is tomorrow, this week on «Film Friday» I bring you what she described as her favourite of all of her films.
Directed by Edmund Goulding, The Constant Nymph (1943) begins when composer Lewis Dodd (Charles Boyer) travels to Switzerland after his latest symphony is badly received in London. He stays at the home of his old friend and fellow musician Albert Sanger (Montagu Love), causing great excitement among his four daughters: Kate (Jean Muir), Toni (Brenda Marshall), Tessa (Joan Fontaine) and Paula (Joyce Reynolds). Despite the fact that she is only a teenager, Tessa is in love with Lewis and dreams of helping him reach his full promise as a composer. Worrying about his sheltered daughters' future, the ailing Sanger instructs Lewis to contact his wealthy brother-in-law, Charles Creighton (Charles Coburn), when he dies.
Upon Sanger's death, Kate decides to travel to Milan to study music, while Toni marries wealthy family friend Fritz Bercovy (Peter Lorre). Complying with Sanger's dying wishes, Lewis sends for Creighton, who arrives with his beautiful, grown daughter Florence (Alexis Smith). Lewis and Florence immediately fall in love, and when they announce their engagement, Tessa — who has a bad heart — faints at the news. Creighton arranges for his nieces to attend boarding school in England, after which Lewis and Florence marry.
Six months later, Lewis is frustrated by his wife's efforts to manage his career and the couple quarrel frequently. At the same time, Tessa and Paula run away from school to the Dodd house in London. Tessa's presence inspires Lewis to write new music, leading a jealous Florence to believe that her husband is falling for the teenage girl. On the opening night of his new symphony, Lewis finally realizes that he reciprocates Tessa's love and proposes to her, but she refuses because he is married to her cousin. The excitement causes Tessa to have another fainting spell and Florence insists that she stay at home, rather then attend the concert. Lewis returns to Tessa before the end of the concert, which becomes a success, and is followed by Florence, who tells him that she will not stand in his way if he wants a divorce. Her release is too late, however, as all the conflict has been too much for Tessa's frail heart and she has died.

Tessa Sanger: It was unfair to both of us for you to marry her. You were so mad to get that you forgot all about me! Oh, if only you'd waited a bit.