The Third Doris Day Blogathon: «Romance on the High Seas» (1948)

Directed by Michael Curtiz, Romance on the High Seas (1948) the the story of Elvira Kent (Janis Paige) and her husband Michael (Don DeFore), who suspect each other of cheating. For their wedding anniversary, Elvira books a cruise to Rio de Janeiro, but Michael suddenly cancels the trip for business reasons. Seeing an opportunity, Elvira pretends to go alone, but in fact sends Georgia Garrett (Doris Day), a singer she had met at the travel agency, in her place and under her name. By secretly staying behind, Elvira hopes to find if Michael is indeed having an affair with his attractive new secretary, Miss Medwick (Leslie Brooks). Michael, however, is suspicious over his wife's willingness to take the trip alone, so he hires private detective Peter Virgil (Jack Carson) to see if she is sneaking around behind his back.

Peter joins the cruise and, as part of his job, becomes acquainted with Georgia. The singer, following the instructions of the real Elvira, keeps up the charade by pretending to be Elvira to everyone, including Peter. He reports to Michael that «Elvira» is definitely travelling alone and, to her dismay, Elvira discovers nothing suspicious about her husband. Peter and Georgia began spending all their time on board together and they gradually fall in love, which causes conflict for both of them. Meanwhile, Georgia is almost exposed when her pianist friend, Oscar Farrar (Oscar Levant), unexpectedly arrives on the ship. When she sees him, Georgia claims to be sick and stays in her room. Despite her efforts, Oscar discovers her new identity and visits her cabin. Peter sees them together and he believes that he has finally discovered Elvira's lover. Arriving in Rio, Peter, still thinking that Georgia is Elvira, tells Michael that he has fallen in love with his wife. Michael immediately flies to Rio and Elvira's uncle Lazlo (S. Z. Sakall) advises her to do the same. After much confusion, Georgia is hired for a high salary as a singer at a hotel in Rio, and Peter learns her real identity. The couple is happy reunited, as are Michael and Elvira. 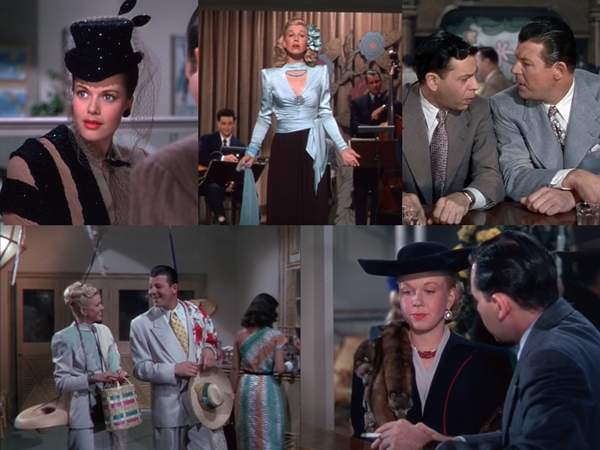 Romance on the High Seas began as a scenario penned by Argentine screenwriters Sixto Sondal Ríos and Carlos A. Olivari named Musical Romance. The property was initially purchased by Warner Bros. in 1939 and acquired by Michael Curtiz for $75,000 in 1947. Curtiz, the esteemed director of such acclaimed pictures as Casablanca (1942), Yankee Doodle Dandy (1942) and Mildred Pierce (1945), had made an agreement with Warner Bros. under which the studio and his own production company were to share the costs and profits of his subsequent films. However, his first picture under the new arrangement, the noir The Unsuspected (1947), was a critical and financial disappointment. But Curtiz believed that he could not produce two unsuccessful films in a row and set his eyes on Musical Romance, which he thought would make a «perfect» Technicolor musical comedy. Jack Warner agreed and greenlighted the project with the working title of Romance in High C.

Judy Garland was the first choice for the role of Georgia Barrett, but her erratic behavior and subsequent nervous breakdown during the making of The Pirate (1948) convinced Curtiz that she was not worth the risk. The director eventually got Paramount to agree to a loan-out of Betty Hutton, but she became pregnant and had to leave the project. Curtiz then considered newcomer Lauren Bacall, but she was not interested. After the «disaster» of Confidential Agent (1945), Bacall distrusted any recommendation endorsed by Jack Warner. Curtiz also tried to borrow Kathryn Grayson from Metro-Goldwyn-Mayer, but the studio refused. Ready to pull out the remainder of his hair, he tested Marion Hutton, Betty's older sister. Although she was a successful big band singer and had made several screen appearances as a vocalist, Curtiz felt that she was not right for the part.

Meanwhile, Doris Day had become one of the best known pop vocalists in America. Born in Cincinnati, Ohio, Day grew up dreaming of becoming a dancer, but an injury to her right leg during a car accident curtailed those prospects. While at home recovering, she discovered that she could sing and was soon performing on local radio programmes. Day eventually caught the attention of jazz musician Barney Rapp, who gave her a job as a vocalist with his orchestra. After working with Rapp, she joined Les Brown's band and scored her first hit recording, «Sentimental Journey», released in early 1945. Her popularity continued to increase with six other Billboard top ten hits and a tour across the United States with the Les Brown band.

By early 1947, however, Day's future was uncertain. The swing era had peaked and her marriage to saxophonist George Weidler had come to an end. Believing that her dreams were over, a depressed Day prepared to return to Cincinnati to work at a local radio station. Before she left, her agent, Al Levy, convinced her to attend a party at the house of composer Jule Styne, who, along with lyricist Sammy Cahn, had a vested interet in locating an actress-singer for Curtiz. Day remembered being cornered by Levy, Styne and Cahn and pitched to go to Warner Bros. to audition for Curtiz.

A reluctant Day went to the Warners lot on April 16, 1947, accompanied by her agent. When she met Curtiz, she told him that she knew nothing about acting and was unenthusiastic about being in the film. She later recalled, «Nothing mattered to me except my personal life and my personal life was a melancholy ruin.» Day warbled a few lines of George and Ira Gershwin's «Embraceable You,» but then broke down in tears and retreated to the ladies room to compose herself. After Day returned and sang a bit more, she started crying again and apologized profusely to Curtiz. Instead of being furious, the director was charmed by Day. «You're very sensitive girl,» he said in his characteristically broken English. «To be good actress is to be sensitive [...] I sometimes like girl who is not actress. Is less pretend and more heart.» According to Day, Curtiz then gave her a marked-up script, instructing her to memorize several lines and return to the studio the following morning for a series of screen tests.

Day's first screen test for Romance in High C consisted of three scenes with Don McGuire, who was subbing for Jack Carson, already cast as private detective Peter Virgil. Right away, Curtiz «knew he had his star.» Later that day, she was informed that she had the part and then signed a seven-year contract with Michael Curtiz Productions. The film was subsequently renamed Romance on the High Seas and filming began a few weeks later, in early June 1947.

Curtiz initially tried to shape Day's performance into a «brassy Betty Hutton hybrid,» but he quickly realized it was a bad idea. In addition to preserving Day's natural character, he was determined to protect her confidence. He flatly refused to allow her to view any of the rushes. When she asked to see how a printed scene came out, Curtiz told her, «I like it [...] and that's good enough for you.» Shortly before production began, Day began taking acting lessons from a drama coach, Sophie Rosenstein, but Curtiz put an halt to it. He explained: «You have very, very strong personality. Is you. Is unique. That's why I don't want you to take lessons. You a have a natural thing there in you, should no one ever disturb. You listen to me, Doris. Is vey rare thing. Do not disturb.» Day accepted the director's counsel and maintained a deep respect for Curtiz throughout her entire carrer.

Romance on the High Seas was released on June 25, 1948 and was a great hit, grossing $2.1 million domestically. Doris Day turned into a instant star, with the song «It's Magic,» written by Styne and Cahn for the film, reaching number two on the Billboard chart and receiving an Academy Award nomination for Best Original Song. Curtiz was so pleased with his discovery that he rushed Day into another picture, My Dreams Is Yours (1949), again with Jack Carson.


This post is my  my contribution to The Third Doris Day Blogathon, hosted by Love Letters to Old Hollywood. To view all entries, click HERE. 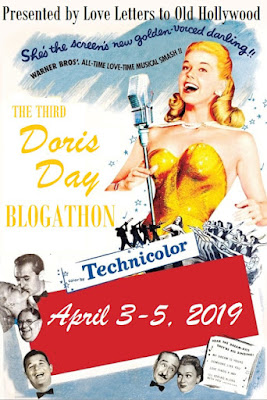